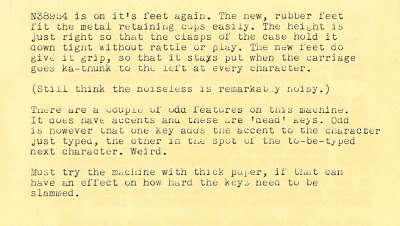 Tried that - no difference. Maybe this is just how it was meant to be (or the mechanism has a bit more internal resistance that it had when new). It is actually more the typebar mechanism, vibrator-bar and keys that go 'ka-thunk'; the carriage is not the main culprit.

But back to the subject of feet.

The new feet do make the machine complete again.

The original feet had gotten totally out of control. I guess this specimen had been equipped with the special cushioned feet, as Remington proudly advertised; see mid second column:

Probably great in 1933, not such a hot idea in 2013. The remains of the old feet had to be chiseled away. Literally. The black had become like tarmac and the red gave off a clingy type of dust and both had worked their way into the machine and into the case-lining. There is still some of the black tar clinging to the machine and feet-cups.

But now with the new feet from TTS; fit the machine great: 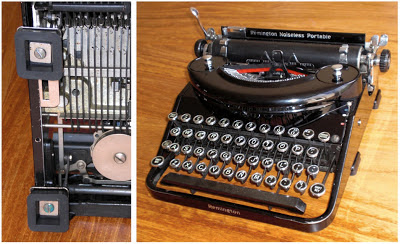 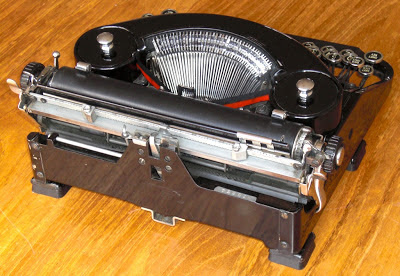 By the way; learned that the screws could do with a final extra turn after settling after typing a page or two. As the pictures show, the lettering on this machine is not so great anymore. On the back the remains of the original markings can still be seen very vaguely as an imprint in the lacquer. The wordmark on the front and paper tray have lost their gold crispness. Nevertheless, the machine is on it's feet again and it types!

Mind-boggling that spare parts for such an old and obsolete machine can still be purchased today. Again the wonders of the digital, internetworked world; otherwise would never have known about TTS and this would just not have been possible.
Posted by RobertG at 6:50 AM