Service of the Corona Standard

Although bought as candidate parts-machine, still had a go at patching up the 1943 Corona Standard. (Typewriters though a 'utensil' pick up historic context. No provenance came with this one, but its manufacturing date+place and it having been in Belgium do give it context. At the very least it allows conjecture as to how it came over to Europe. Perhaps similar and inverse to a recent post in the Typosphere about 'one to get rid of'; this made me reluctant to relegate it as 'parts'.)

The machine was of course dirty and had a few things wrong and broken, the most noticeable thing however is the keyboard. The machine had new type soldered on and all character keytops got new tags for the odd 'AEU' layout. Probably done somewhere in the mid to late forties.

This new keyboard was probably applied in a Montpellier shop. Looking at the keys today, it wasn't done all that well. The new keytops were of a quality that age badly (or were already old when it was done). More telling is that the Corona keyrings were re-used and actually applied wrong. The Corona keyring has four tabs, with two closely spaced to flank the keypad-stem to prevent rotation. The re-fitter either didn't realize this or didn't care, so the rings were applied without the rotation lock. This way they can even be slid off without needing to bend a single tab. (One did.)

Not going to re-solder everything to revert to a QWERTY layout, but I was going to try and make it look cleaner and complete again. The nice thing about the Corona standard keyrings is that they're mounted with tabs and not pressed on; so no special tools are needed to remove them. Wanting clean keys, fully replaced the keys with new 3D printed keytops (dimpled pad for the Corona 'touch') and new 3D printed plastic keyrings. (Not yet found a solution/source for new metal keyrings...) 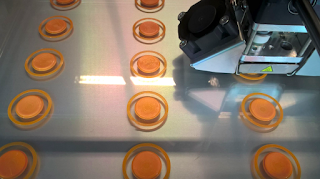 The 3D printed rings are a press-fit. The keytop is a press-fit into the ring. The assembled key is a snap-fit on the keypad of the machine, the flange of the keyring scrapes over the stem at the back of the keypad to prevent rotation. After some experimentation, printed the rings in carbon-filled black filament. This gives a nice matte finish and is a bit stiffer than regular PLA filament. Had a go with chrome paint, but the matte black looked best on this austere machine. When doing the whole keyboard, found out that there is some variation in size of the keypads per row that I hadn't taken into account. So the top row needed a bit of double-side tape added to keep everything in place and fix rotation. (The 3D files for the keytops and rings can be found on Thingiverse. Should anybody have a Corona needing new keys... :)

The dimpled pads got a sticker with a Corona-inspired typeface, then got a protective layer of 'Microfix' against wear. This should last a while - with this layout I can't imagine the typewriter will be used heavily for turning out many pages...

Another item was the carriage return rattle. Here I had the great benefit of a comparison machine. The '38 Sterling carriage positively purrrrs when returning, whereas this '43 Standard rattles like it's falling apart. Some closer inspection showed that part of the escapement (the 'moving dog' part I think) oscillates wildly only on the Standard when returning.

This part is/should be kept under pressure by a small spring with adjustment bracket. This then prevents it from wildly vibrating and rattling on the carriage return. On the Standard this spring was 'idling'. Using a screwdriver and pliers (to push the bracket whilst screwing) this spring was put under a little tension again. The Standard now returns again without excessive sound-effects. Not quite purring, but sans-rattle :-) 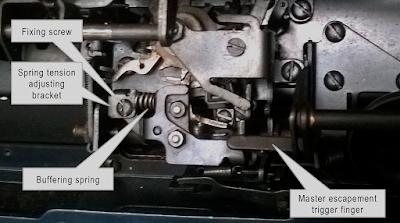 Even with the spring tension fixed, the dog doesn't quite clear the starwheel nicely on the return. This still gives a hard edge to the return sound that needn't be there. Haven't spotted an adjustment for that (yet).

Some other small adjustments were made, like forming the master-escapement-trigger-finger to make the escapement reliable again for all keys. The re-fitter probably tried to make one key a dead-key by bending the keylever-escapement-finger. After years of (dis)use that was all a bit of a hit-and-miss, now mostly fixed. (All this did demonstrate the need/use for diverse types of pliers.)

Still to mull over: one issue of a missing linefeed detent roller: 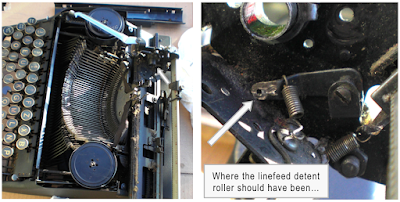 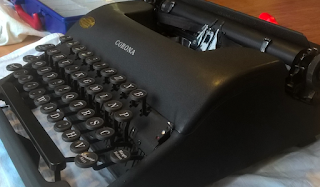