That little black wooden case contains an early Corona Four typewriter. The case looks exactly like the Corona 3 case, except it is larger and it does not have the fold-down front-flap. 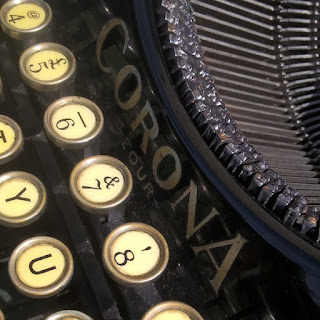 The Corona Four really is the Corona 3 without the folding and with a 4-row keyboard. Other than these two, admittedly major, changes it is amazingly similar to the venerable '3'. 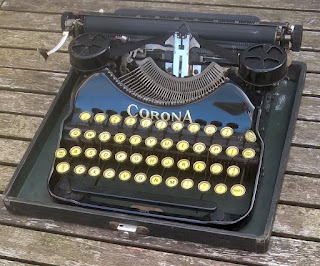 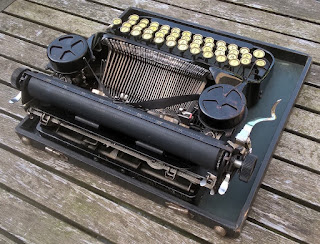 The spool covers are present, but rusty. Especially where the return-lever will mar the spool cover when you forget to lift it up before trying to return the carriage. This is an early Four, with the old design spool covers (pre '28 ?) and the ribbon selector on the old '3' spot instead of beside the keyboard (pre '27 ?). 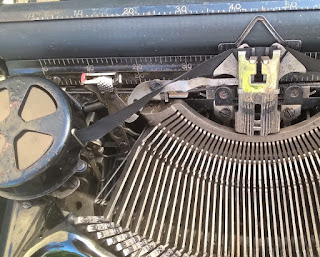 Other than that it is really in very decent condition with a good, solid carrying case. All rubber lost its spring of course and probably one paper-bail spring is missing. But apart from these points merely a layer of dust and light tarnishing of the metal bits. The case still has the brush and oil tube held in the clip. Very well preserved typewriter all in all.

As a bit of a surprise (for I'm told a Dutch first owner) this typewriter has a British keyboard layout - i.e. it has an '@' character that's quite useful nowadays and an astounding array of fractions that I'm not sure were ever all that useful. Machine labeled at the back for the London branch of Corona at Aldwych House. An early machine, patents still pending. 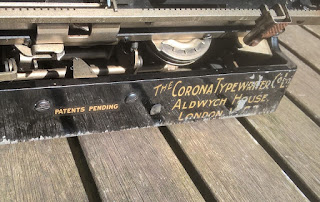 The platen was stuck solid to the front feed rollers. After breaking the platen loose with some gentle yet persistent force, the machine still works as it should without any further tweaking. Working fine at 91 years old with probably decades of storage. 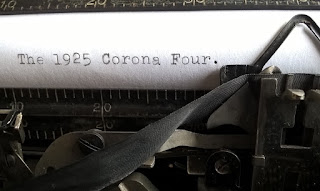 Again am amazed how robust these small portables are :)
Posted by RobertG at 12:13 PM