Remington Portable bellcranks are not all identical

Who knew. Only after starting to put them back did I notice that these little levers look the same, but come in left-handed and right-handed varieties. That was also when the remaining goo lodged around the pin became evident. So all off again. With a toothpick the thick, sticky brown grease can be pushed off. 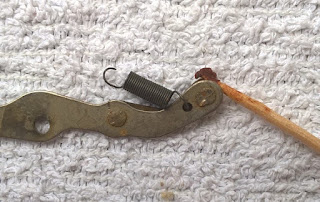 So a small cup is filled with hot water and soap to soften it all up. Quite a bit of poking to get that grease away. The most effective way turned out to be using a toothbrush - holding the part and brush submerged in the soapy water, then wipe all off with paper towel and toothpick. That then gave 22 left-handed and 20 right-handed cleaner bell cranks (or 'intermediate levers', according to Ames). 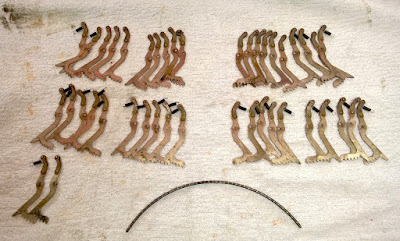 After some experimenting it turns out that the mounting side of the small connecting plate is the hint to use a left or a right sided bellcrank. The crank should be in-line with the key-lever underneath (makes sense). Getting them wrong also becomes noticeable as they then won't fit properly and jam in the segment.

Before putting the bellcranks back, the fixing wire was given a quick polish. Won't make much difference in how light the machine runs, but having it smooth may make inserting it in the segment a bit easier.

This is still a fairly dirty, worn and beaten-up machine. One of the 'clevis' springs is broken and several cranks show some signs of being ever so slightly bent. May be from original adjustment, but given the overal state of the thing I suspect it's from plain hammering too hard on the keys. 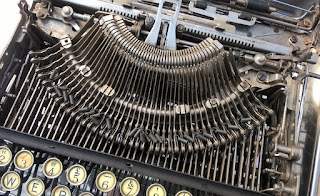 Still unsure if this typewriter will become completely whole again, but now with the row of 'intermediate levers' mounted. One small step forward. Next up is fixing all the springs. Keeping this a relaxed and slow-moving project.

Experience gained; beware of identical-looking parts that aren't!
Posted by RobertG at 1:26 AM