Unexpectedly, two typewriter shipping cases turned up in a small local archeology museum. Hadn't expected anything this modern there. These were on display as part of the archaeologists tools. (With a theodolite stacked on top.)

The lower box originally contained a Remington Special, serial number Z113216, that was shipped as order number 13054. From the serial number, probably some time around 1928. 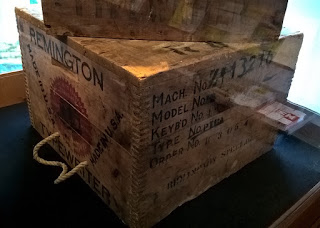 On top of that is another wooden crate, lettered for a Regal-Royal typewriter. No details. From a quick glance around the online hive-mind, Regal was Royal's own rebuilder of typewriters that promised to make their machines "Like-Nu". 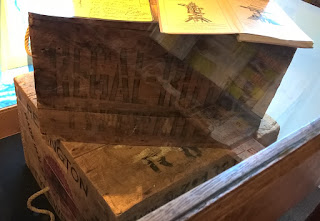 Unsure if the Remington Special was ever connected with the archaeologist van Giffen or that particular dig, but the period is about correct. The major excavation took place from 1930, though he'd been active for several years prior to that in excavating the mounds.

These mounds (wierden) contained artefacts from probably at least the 7th century BC up to around 1200 when dikes took over their function. A lot was dug out of the few mounds that were excavated. Alas many (most) were already sold off for the fertile earth, to be scattered on the fields.

Both the small village of Ezinge and the museum are well worth a visit. Even if merely dropping by virtually. (Keep going straight towards the church - the street view car nearly made it round the church ;-)
Posted by RobertG at 10:27 AM