This Olivetti MP1 typewriter is in very good condition. That is good, because they are not machines I would like to 'mess with'. They are too rare, dare I say valuable, and stylish to want to risk damaging it. 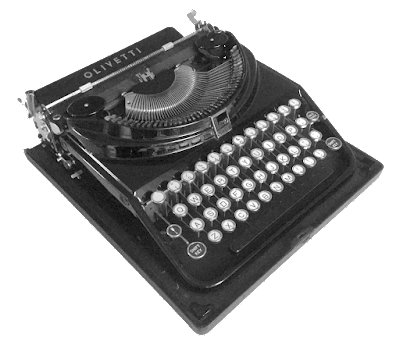 Having said that, a very simple little fix is possible without too many risks - giving the typebars an even 'rest' again.

A start with any newly acquired typewriter can be to clean the type of any accrued dirt or caked ink. It's a good idea to place a cloth under the typebars, to protect the machine and collect any dirt. In this machine's case, cleaning was hardly necessary - a light brushing, no hard-ink poking (needle) was needed here. 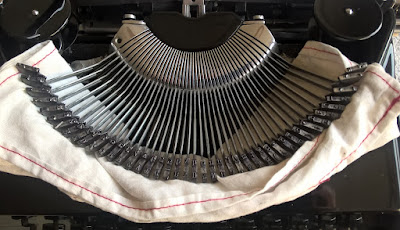 The type in detail, with foundry-mark AR. That would be Alfred Ransmayer & Albert Rodrian or 'RaRo' as the typeface font maker. 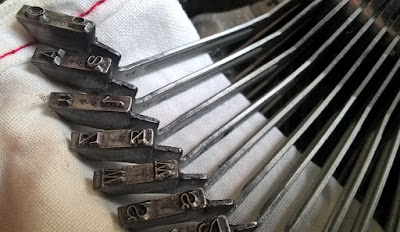 The typebars in a mechanical typewriter usually drop back on a typebar-rest of felt to dampen the sound and reduce any bounce-back. Over decades the typebars will have made a dent, compacting the felt and reducing the effectiveness.  In the case of the Ico, this can also cause some typebars to hit a metal tab as they fall back - giving a sharp, loud 'tick' for those typebars.

Using the cloth under the typebars, these can be coaxed up all together and held in raised position with a clip. This should prevent any damage (bending) of the typebars and gives access to the typebar-rest. 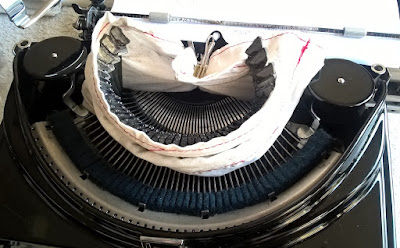 The imprints made by the typebars on the felt can be clearly seen here. In many typewriters, this felt strip is in some way clamped or held tight in brackets. The Olivetti engineers realised that there will always be 42 out of 43 typebars pressing down on the felt, so designed the strip of felt to simply lie loose between guiding-brackets or tabs.

The felt can simply be picked up taken out. 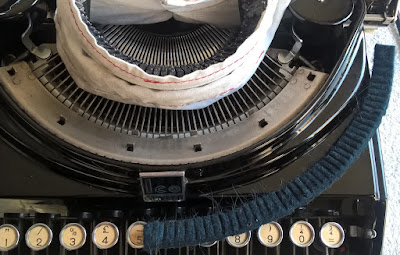 And then be turned over and placed back. 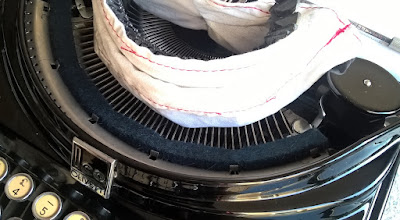 This gives the Ico again a smooth, even typebar-rest with the original material that should prevent 'ticking' of typebars against the metal tabs as well as improve the dampening. 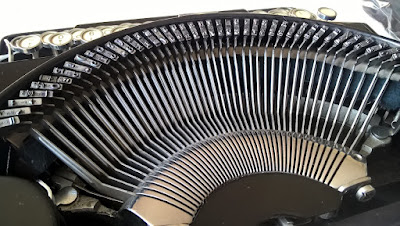 So again the full array of typebars lying at rest with improved dampening- against the original felt. A first, simple 'fix' without much risk to the Olivetti MP1 Ico.
Posted by RobertG at 1:01 AM