The twenties and thirties were the most active period of development for the Meccano system with many new parts being added. Such new parts would be announced in the Meccano Magazine, usually with a fairly small notice introducing the new part with a small image and a suggestion for its use.

In this January 1928 issue, a larger notice is placed for an important innovation; the new boiler, part 162. 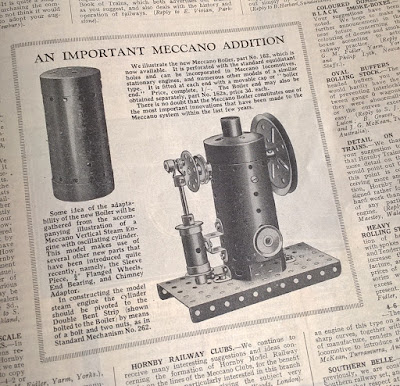 The image shows what is perhaps a prototype with a square-cornered cut-out to represent the firebox-door. The production items have rounded corners. In some ways it is an odd part to be added, having limited use. (A common reason for rejecting reader-suggestions for new parts is that it would have few uses.) It is mainly an ornamental part - very handy for creating steam engines of course, but otherwise limited in its use.

A new part would then also be worked into new models in the instruction books. The boiler 162 was added to Outfits 3 and up - and e.g. used here in an Outfit 4 model for a steam winch (4.25) in the October '28 printing of the manual. 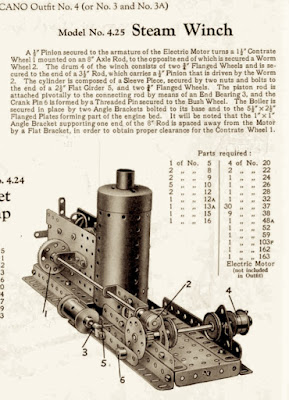 There are some similarities between this model and the January example of the vertical engine. It may be they were all created in one session in the model room on the occasion of the introduction of the new parts. On the other hand, there are not too many ways to create a cylinder and motion with the new parts. In any case, the models do capture the essence of their subjects quite well.

The steam winch (or 'donkey engine') is a nice little model - here in vintage, period parts. 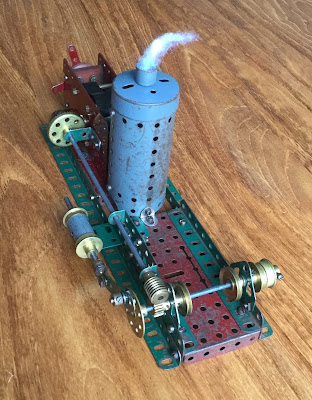 (With the exception of the 'smoke', that's new and not an original part.)

Very much unlike today's construction toys, these Meccano mechanisms need to be fine-tuned and adjusted to make them work. As such, it is a good representation of a steam engine - also needing a bit of alignment and oiling to make it all operate smoothly. 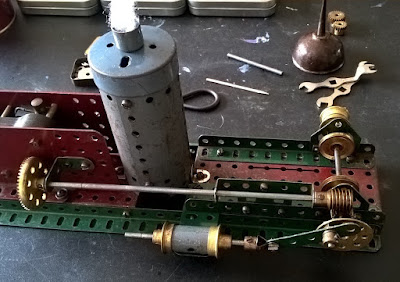 As nearly always, some small modifications from the instructions is needed to make it work. E.g. some shimming of the cylinder sleeve to give clearance for the cylinder-ends to fit.

Strangely, the cylinder-line is set below the the crankshaft. This does not help smooth running and is not 'sound engineering'. Perhaps this was meant as something left for the builder to improve on.

The rapid evolution of the Meccano system at that time also threw up another issue. Another little detail that changed, was the bearing of the electric motor getting larger around 1929 (room for a grease-cup). The model can't be built with the new motor, the gears will only fit with the earlier type with a short journal bearing of the drive-shaft. The model built here with a short-bearing 4 Volt motor, this specimen likely from ~1928.  (Next to it a later 6 Volt motor with grease-cup, this one dating from ~1930 or so.) 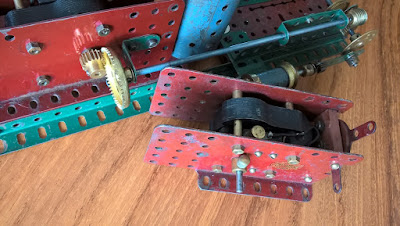 Overall a fairly simple and pleasant model to build - including some mechanical 'tinkering'. The 'important' boiler here is however purely an ornamental part. For a system that was sold as 'real engineering in miniature', perhaps not all that important an addition. 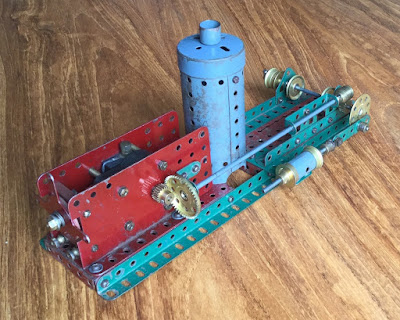