That is what Underwood called it, and new is what it is. (Well, it was.) 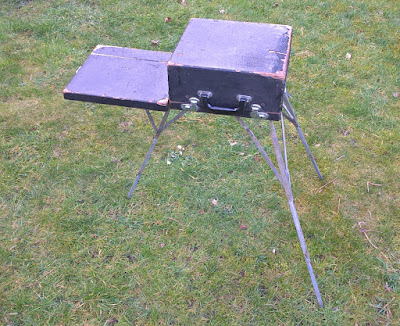 This case came with an Underwood Champion typewriter that was made in 1939, probably early '39. That makes this tripod typing-stand case probably an early specimen of the type.

The stand mechanism is marked only with 'patents applied for' - and that would match the situation in 1939.

This very clever folding mechanism was incorporated by Underwood in their portable typewriter's carrying case, but it was not their design. It was I think designed by Mr Harold Howe who applied for at least one patent on January 18, 1939 - and got his US patent 2,213,985 granted on September 10th, 1940. 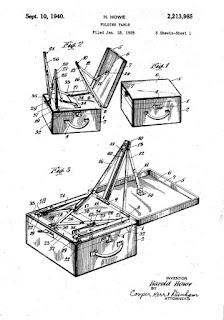 (The patent noted on oztypewriter's post on the Underwood stand was very likely inspired by the Underwood stand, judging by figure 2 in his patent. Mr. William Wade's patent is however over a decade after the Howe patent and after Underwood started advertising and selling their built-in typing stand.)

This carrying case overall is a bit 'tired', and also the lid of the stand mechanism no longer quite closes. It is unknown where this typewriter was stored and for how long, but even through this small slit, the inside of the stand mechanism managed to attract a lot of dirt - and the legs have corroded rather noticeably. 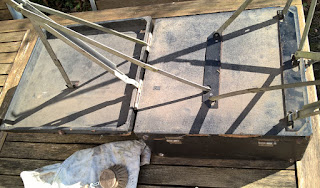 Opening the lid is easy, but then it gets more complicated. As a first step and in the interest of safety, it's probably a good idea to put some oil on all joints and especially on the snap-points of the leg stays. How these stays should be 'snapped' in place is fairly straightforward. The next step however might not be immediately obvious without the manual to explain how to unfold the legs.

To unfold a leg the small brass latch that protrudes from the leg must be slid down (or up, depending on point-of-view). It may be necessary to squeeze the whole leg a bit and wiggle, especially if it has not been unlocked for decades. But then an internal spring starts to help unbending the leg - with a second latch the third section of leg is released. 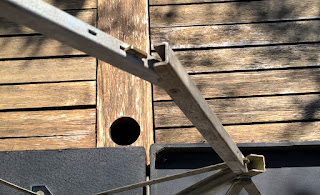 The clever bit of Mr Howe's design is that the latches also lock the sections in place when folded out. This makes the whole stand quite stable and robust.

To fold in again, it's the same procedure in reverse, until the folded leg snugly 'clicks' in place in itself. 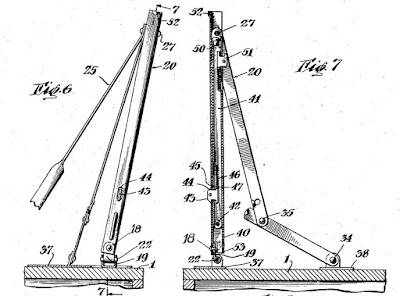 For example the latch 45 in figure 7 holds the whole leg tight, but it is mounted in the third, end-section and when that is unfolded locks it in place against the second section.

Despite being made from aluminum (American made), it really does fold out into a very sturdy stand. This one will be worthwhile to clean-up and find a fix for one missing rubber-foot. For now however it goes back into storage, the typewriter itself is up next :)