Typebar linkages of the Underwood Champion

Investigating the source of the squeaking-noise, looking closer at the mechanism revealed it must have been re-assembled at some point rather haphazardly. The linkages of a typewriter are meant to all line up beautifully, forming a regular pattern across the basket. In this typewriter, the wire-links definitely do not form a regular pattern, and some of the sub-lever's look suspect as well.

It's explained in the service-manual that the typebars are numbered, as are the sub-levers - but the links are not numbered. At disassembly these should be carefully stored on a peg-board in the correct order to enable assembling in the same order. This may have been overlooked - or the table fell-over and some parts got trampled on.  (That actually might explain some of the other weird damages inside the machine.)

The order is definitely not correct (orange lines - do not line-up). And several typebar-links are not original, but bits of bent wire with 'improvised' loops (red circle). The sub-lever shown with the red line looks to be in a wrong spot too.

Some of the typebar-links have large loops at the end and a few are simply straight, so likely that some will be fouling their neighbours too. That could be a source of its 'heavy' typing or possibly some of the noise.

This whole jumbling of typebar linkage-bits also turned out to be the cause of the key for the letter 'o' to be disconcertingly out of line. 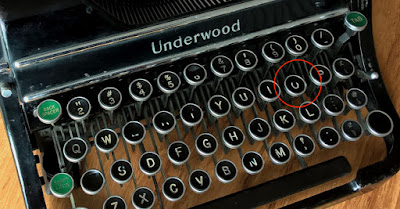 Most of the keys could already be aligned nicely by adding a 1mm strip of paperboard padding to the 'lip' of the panel right behind the keys - this is where the top of the keybars rest against (green oval). This should also help a little to further reduce noise, dampen the thud.

This new anvil-strip lines-up most keys, except the letters 'o' and 'v'. The cause for the letter 'o' was a wrong typebar-link that was too long. It was taken out and a new link was bent from ~1mm wire. (It needs to be fairly stiff, so a paperclip of a just under mm diameter was used - soft steel wire would likely not serve long in this function.)

This new typebar-link, with an attempt at following the original pattern of bends, was then placed back in the machine. The ends and sides of the loops are filed down to facilitate inserting it in the eyelets of keybar and sub-lever - and also to reduce the chances of it fouling any neighbouring part.

With the new, shorter link in place, the letter 'o' again sits nicely in line with its neighbours.

Taking out a link and especially putting-in a new link turns out to be extremely fiddly. Near impossible when trying it without fully taking the whole machine apart (and not keen on doing that, yet). So even though there are several 'wrong' links of various wire-gauges, these will not be replaced like originally planned. They'll have to do for a bit longer.

What still remains is the slightly dropped key for the letter 'v'. 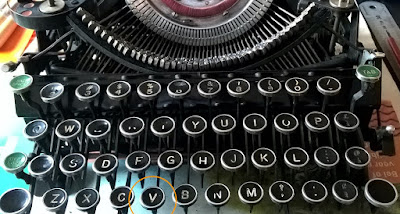 After lots of peering into the mechanism and poking around at things, the most likely cause of this is a fouling of the sub-lever with the keylever. The sub-lever eyelet-end is bent sideways to accommodate the curve of the basket. This adds a risk of it catching the keylever, and this one does - at the spot shown in the mechanism diagram above with a red circle.

Despite attempts to give it more clearance by 'forming' (bending, when intentional) and even some filing-off of a spot at the top of the keylever (yes, felt guilty about this...), I'm going to have to admit defeat on the 'v' key for now.

Moving on to the next fixes to make this machine a winner again :-)