Opening the Supertotalizer and getting the Comptometer to work (mostly)

How to open a Comptometer and get access to the mechanism is well documented in several places on the internet. The Supertotalizer is not much different, it starts with removing the front top panel by removing two screws (green circle). The panel can then be lifted off, moving it forward at the same time to slide the two prongs out of the side-beading (green arrow). 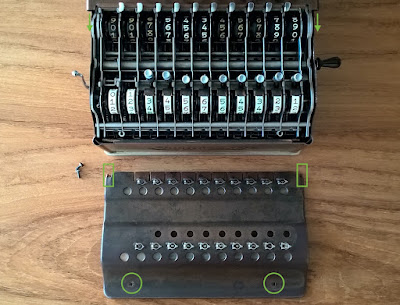 Inside this panel are two strips of celluloid, held with thin clamps behind the 'portholes'. Judging from the multiple yellowed patterns, these are probably the original celluloid strips that have been shifted around over the decades. With a bit of puzzling a new position could be found without any cracks visible and not-too-yellow. 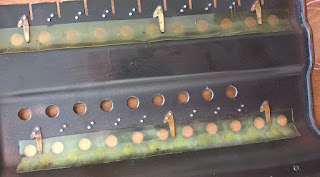 The clearing lever for the totalizer-part can be removed by undoing a set-screw that is inside of the case. After removing this lever, best give the set-screw a few turns back in to avoid it getting accidentally lost.

The handles on the right side of the calculator can be taken off by undoing their mounting screws, as is standard for regular Comptometers.

Then the case can be set on its side and the four screws that hold the mechanism in the case can be removed. I've read it is common for Comptometers to have lost some of these screws (they work loose and drop out) and this Supertotalizer also is missing one of the mounting screws. (The other screws in the bottom hold an internal stiffener, the screws at the box-corners hold the sides together - best left untouched.) 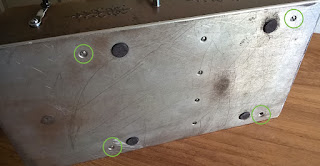 With these removed, the complete mechanism can be lifted out of the box. Either slide it out when on its side or grab by the rim of the top plate and lift out. It can snag on the cork padding of the box-sides, but with some wiggling it should come out.
The mechanism of a Comptometer is very well pictured and extensively described on the internet - those pages have been very helpful in getting to grips with this calculator. As others have remarked; this is a remarkably densely packed mechanism! 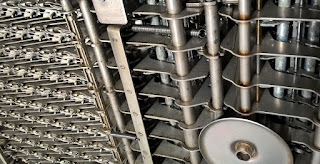 To get the sluggish columns of the main unit working again, oil was applied to all bearings and quite liberally to the stuck carry-cams. For this, a simple mineral sewing-machine oil was used. Special creeping oil was considered, but did not want to risk mixing and getting 'odd' substances in the machine. The new sewing-machine oil will also evaporate over time, but should be non-gumming. It mixes with and dissolves the old, gummed oil and washes it out - it is hoped to spots where the 'gum' cannot do harm. Continued exercise of the machine will be important for that - as per the first point of advice from The Gramophone Company in the 1920s: "Disuse is bad for the machine".
A piece of soft wire was used to route the oil to the spots deeper inside the machine. Then the numeral wheels were rotated by hand to work the oil into the sluggish bearings. (With the machine zeroed, the rock-frame is tilted forward and all wheels are loose, can be 'twiddled' freely.) This mostly solved the carry-problem of columns 6 to 10, but the first column stubbornly refused to do a carry. Instead always blocking at the 9 to zero point.
With much staring into the mechanism, referencing the pages at John Wolff's Web Museum and viewing a great animation of the mechanism, the culprit was identified to be the zero-stop of the reset-mechanism! This lever is held by a torsion spring against a frame-tab and moved as the rock-frame moves. Maybe this machine got deformed from a few knocks during its time, but with the rock-frame engaged, the zero-stop of column 1 was still in the path of the stop-pin - thus preventing moving from 9 to zero. Very careful forming of the frame-tab resolved the problem of column 1 (further tweaking of the tabs for other columns solved remaining reliability issues there too). Note that a small change in the holding tab has a large effect on the zero-stop position, so very small adjustments only! 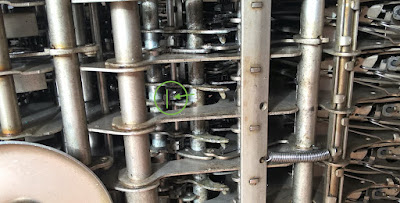 To clean bearings without completely taking the mechanism apart, it is recommended to run a rod of the same diameter through the machine to push out a bearing-rod for proper cleaning.

This actually worked well on the intermediate-gear rods (green circles) - it made the main-mechanism noticeably faster. Thankfully there were no mishaps and no gears fell out of the machine during this process. An old knitting-needle worked well, with a diameter of 2.8mm and the end sawed-off to give a clean push-plane.

The number-wheels and the carry-wheels (yellow circles) however have a smaller rod of 1/16" diameter - have yet to locate a smooth steel 1/16" rod (and pick-up courage) to tackle those. Another thing is that to remove the carry-wheel rod, first the intermediate-gear rod needs to be replaced with a slightly shorter temporary rod. This then allows the holding-brackets to tilt/slide away, releasing the carry-wheel rod.
The totalizer-component was completey seized-up with gummed-up old oil. Extensive tweaking and long stares at the mechanism revealed this was only from the carry-gears being stuck to their axle-rod (red in drawing). The rest of the gears and wheels were easily freed. Applying liberal oil and forcefully working the gears back and forth individually slowly released the columns one by one. 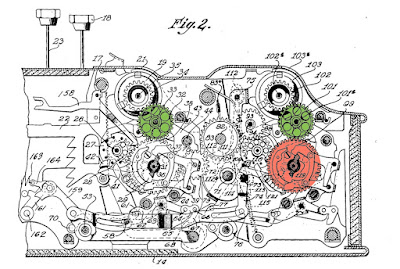 This was a long process, leaving the oil to penetrate inside the gear-wheel bush for several days (with periodic working the wheels) for every column and using prods to get the oil where it has to be.

In the end, all columns of the totalizer again move freely and the carry works fine. That the old gummed-oil is still on the rod is a worry, it should really be taken out and properly cleaned - but for now this is what could be done.
A few of the blinds had come unstuck from their peg, with a thin screwdriver their tabs were easily flipped back over the actuating peg (green arrow in picture, green circle/arrow in figure below). 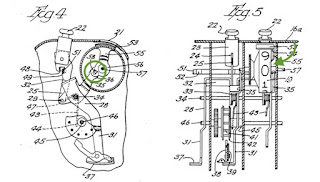 With some extra oil at likely spots and a thorough cleaning of the red correction-button stem, the controlled-key error detection mechanism also started to function as advertised.

The one thing that still won't work, is the main bell. The mechanism is there and seems correct, the rock-frame however just doesn't put enough 'zest' into its engaging-movement to give the hammer enough momentum to strike the bell. We can live without a bell.

The Felt & Tarrant Supertotalizer has now been oiled and continues to be extensively exercised - and all the main functions work again.

Now discovering how to operate it; a fascinating calculator and it's surprisingly fast and capable.