My most worn wristwatch of 2021

Inspired by Teeritz' re-cap of the year in wristwatches that are always read with interest and nudged by Frank's follow-up, here's my most-worn wristwatch of 2021.

Working from home nearly all the time, didn't wear a watch most days - the one that did get use was my 1935 Elgin with its expansion band. There is some yellowing of the crystal (as is common) that gives a golden hue to the dial. Fortunately there is no corrosion (from the yellowing crystal) and the dial is still perfectly readable and the mechanism runs fine.

The Flex-Let scissor-type expansion band is a bit later than the watch, but these start becoming fashionable by the mid 1930s so not too inappropriate for this watch. It takes some getting used to, but then works very well. Being expanding, it's very comfortable around the wrist. 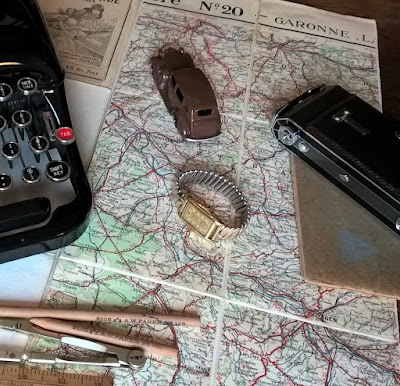 Also in the frame is an equally art-deco period Remington 5 Portable typewriter with the 'Streamline' housing style.

The black-and-chrome Kodak Six-20 from the mid to late 1930s is lying on Junkers documentation for their vibration-free engine. Not quite Bond-level material, but perhaps 'ten days in Paris' or 'night train to Munich' atmosphere :)

The pencils are late 1930s or 40s items from Faber, the ruler is of the same vintage.

The model car is a (reproduction) Dinky Toy number 39a, the Packard Super 8 from the American cars series released in 1939. The background to it all is a late 1920s Carte Taride linen-backed map of the Garonne region of France.

Hadn't considered it before, it's a nice idea; January as Wristwatch Retrospective Month :-)