One of the spools of a 1920s Remington Portable typewriter proudly stated it too was 'Remington Make'. 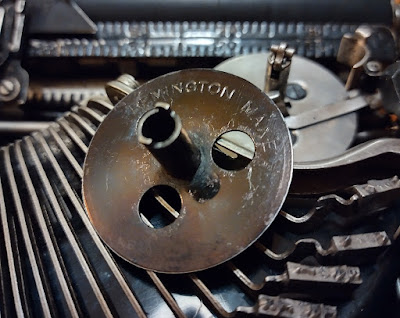 That it is also Remington make is not unexpected- the Portable uses a non-standard, proprietary spool-size.

Unexpected though, is that it has the statement hiding on the inner face of the spool - where it won't be visible when mounted on the typewriter. The other spool has no markings, so it is possible that this is a replacement spool from when a new ribbon was mounted on the machine. Possibly original Remington (Remtico?) new ribbon for their Portable typewriter came with branded spools.

Yet when the spool is filled the ribbon would obscure the writing, wouldn't it. Perhaps a new Remington spool was sold not quite full, only wound with ribbon right up to the writing. Hard to verify today, nearly a century later - un-opened new-old-stock of Remington Portable ribbons from the 1920s will be rare or non-existent.

Another possibility is that the spool-face was accidentally assembled with the writing down, instead of on the outer face. Then there would be other spools of this type with "Remington Make" on the top - a detailed examination of The Typewriterdatabase could give clues on that. So far only "Left Top" and "Right Top" markings spotted. 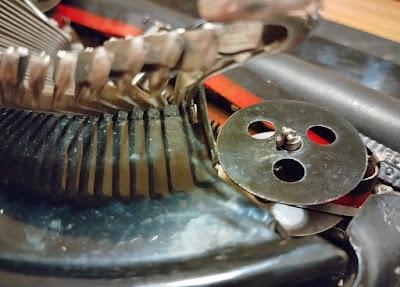 Whatever the reason was for one spool having a hidden 'Remington Make' marking, it's now back on the Remington Portable #2 typewriter and just started taking up a brand new ribbon :-)