With the spare parts in, a set of body-panels chosen and ready to be sanded down and have a coat of primer applied. Having seen several Remington Portable #2 machines (or parts thereof), there is quite some variation on details also on the 'number 2'. For example a late 1927 machine e.g. has no protective plate at the back and a summer 1927 does. A 1928 machine does not and a 1929 machine does again have this. Was this an optional extra? Did they get lost when the machine was taken off the base. The British assembled machine's plate also has an extra hole added, no idea yet what that is for. (But there probably was a reason.)

Even on rusted and worn parts the paint is still strong and very firmly fixed. A couple of different methods of paint-removal were used - that is, the not too unhealthy kinds. Some hot and soapy water was mentioned to soften some paints - this makes it all pleasantly warm and clean, but does not soften the paint. Ammonia is said to remove some paints - this paint is not one of those paints. The most obvious aid and actually successful is acetone. Confirmed then that this is nitro-cellulose lacquer. With some sanding to 'open up' the outer layer, acetone softens and dissolves the lacquer and makes sanding down easier. In the end didn't take the time to soak the parts for hours in acetone. That would've probably removed all the old lacquer, but mostly did sanding with emery paper of various grit sizes only using acetone to soften the hard to get to parts. 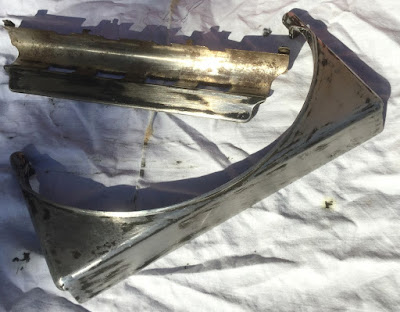 With the parts smooth with most of the old lacquer and pretty much all of the corrosion removed, a coat of metal primer was applied. 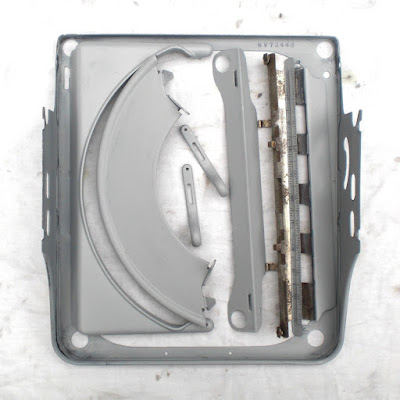 Now what colours to choose for the machine! This typewriter definitely is not going to be black, but will be a two-tone finish. The encyclopedic page on these machines shows the fancy schemes originally available from the factory. (With equally fancy names.) Not going to try to match one of those schemes exactly, but will want to come up with a new one in the same style. How would Algarve Green with Ivory look, or Porto White with Rooftop Red? 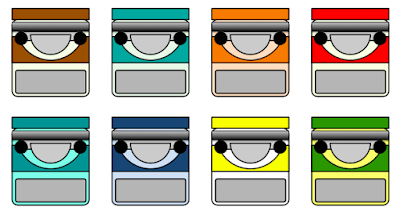