In preparation for a better, more thorough cleaning of the Adler Favorit 2 typewriter, the body-panels were again taken off. It takes more than one session to get rid of the level of dirt (and rust) this machine had. This time without the panels, a look at the mechanism of this 'different' typewriter. 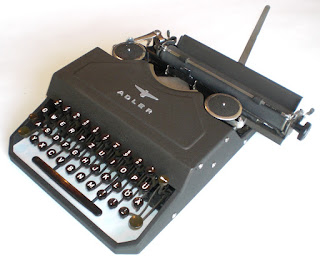 The whole machine is built onto a single cast baseplate. Also all the bodywork is screwed onto that baseplate. 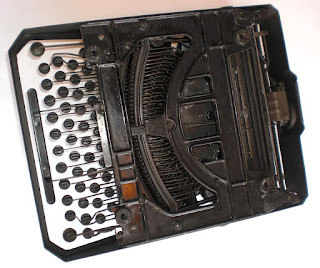 Loosening the top cover screws at the sides, the top cover lifts right off. The main housing slides off after removing two side screws at either side and loosening the rear side screws. The rear panel that also holds the carriage-lock clasps is then sneakily still held by two screws underneath the machine. The full bodywork of the Adler Favorit 2 typewriter then comes off. Heavy panels too, made of 1mm thick sheet metal. 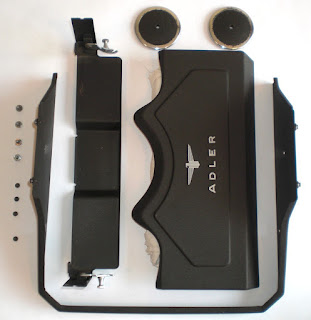 (The spool covers can be simply taken off.) Removing all this then gives the bare Adler portable typewriter... 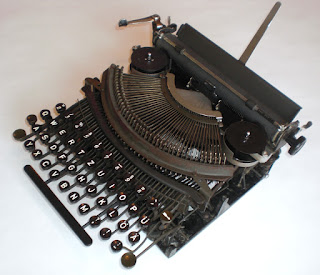 Apart from the carriage lock that was part of the rear panel, this is the complete and functional mechanism as bolted onto the baseplate. 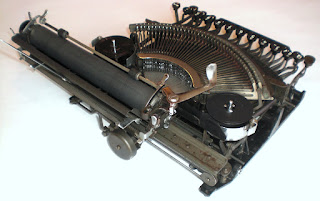 This typewriter does things different from most machines. It of course has a thrust-typing mechanism instead of the more common swinging typebar. It also does not have the usual spring drum with drawcord, but instead a single, long coil-spring that draws the carriage. The machine is carriage shifted, but shifts down instead of the usual up. It does not have a ribbon-vibrator, but a rocking movement moves the ribbon to the platen and back (Farbbandhinundherzuckgabelmechanismus?). With the shifting this means that regular characters print with the top of the ribbon and shifted characters use the lower half of the ribbon. To top it all off, the right margin stop is not a margin stop - it sets the position where the bell sounds, but does not stop the carriage from moving right to the end of its rail!

Underside of carriage rail and escapement: 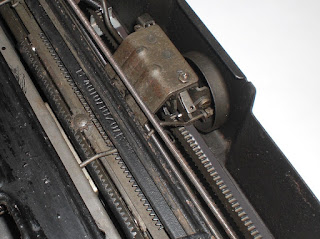 Margin rail with stops and escapement in the bell: 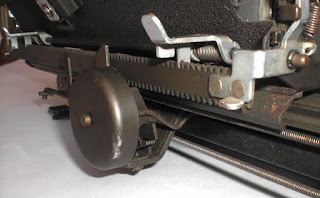 The backspace push linkage (and return spring) into the escapement: 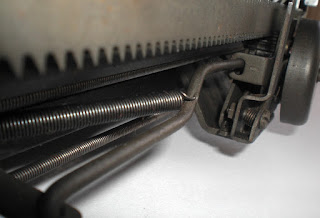 On the left and right ends of the carriage a simple threaded pillar with nuts act as the carriage adjustment. Simple and effective (and very accessible): 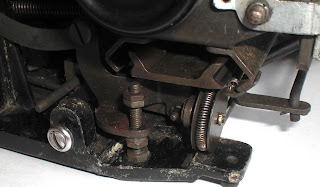 On the left side of the baseplate the shift linkage that pulls the carriage down to shift: 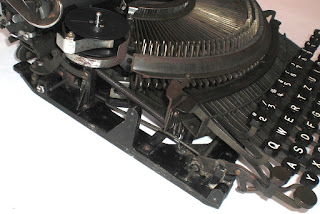 The ribbon advance mechanism is compact and inside the ribbon-cups. It works on every carriage movement; even advances with the spacebar. The ribbon reverse is simply activated by tension of the ribbon on an empty spool and works very well (enthusiastically so, with a very satisfying 'CLACK'). 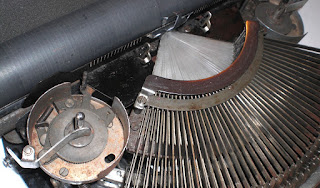 The typeslugs with supports for the thrust-action aligning. Cleaning the type is a bit trickier with not-so-great access and any dirt dropping on the 'sliding table' well. The black triangular plates that flank the sliding plate do screw off however, enabling better cleaning. 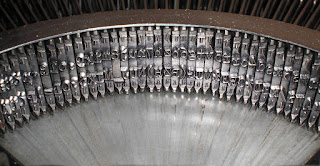 Meanwhile the machine is again a bit cleaner. Some rusted parts were touched up and the lines on the scales were refreshed with new wax. Overall a very sturdy, if basic machine. 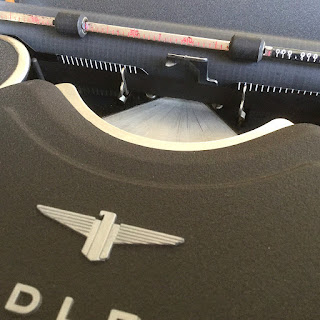 Already in the late forties when this typewriter was made, it must have been an anachronism. Even though it sports a 'modern' grey crinkle finish, it's essentially still a turn-of-the-century typewriter that lacks many of the by-then expected features and ease of use. Because of the horizontal thrust-action and the shifting mechanism, visibility is rather poor - typing in all-caps is pretty much blind-typing.

Nevertheless; despite this machine's hard platen (loud) it is quite light and easy to type with :)
Posted by RobertG at 3:34 AM