Box for the resistance controller

The Resistance Controller was sold by Meccano from the late 1920s to regulate the speed of electric motors. It is a fairly simple variable resistor to be placed in series with the motor. The cardboard lever slides a brass contact over the resistance-wire, wound on a ceramic core (it can get hot). 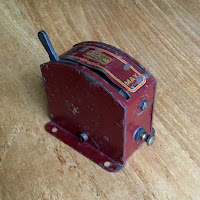 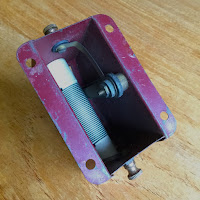 These were made for use with the new, electric Hornby trains as well as for use with the Meccano motors. Despite its age, it still works fine - shown here installed to regulate the speed of a 4 Volt motor of ~1928 vintage driving a Meccano model. 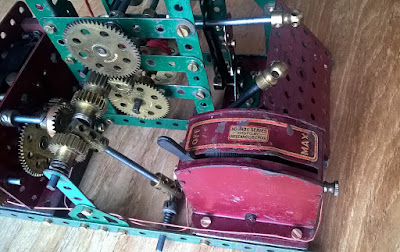 This fairly 'thumbed' specimen was bought for a few Euro and came without a box - but with lever intact and complete with the original 6BA thumb-screws.

Even though most Meccano pre-war parts are fairly robust, this Controller is made of thin sheet and the lever is a fairly vulnerable part. So decided to have a go at making a new, reproduction box for the Resistance Controller. One of the wonders of the current times is that information on such niche items is readily available. Including many images of the boxes these items were originally sold in. 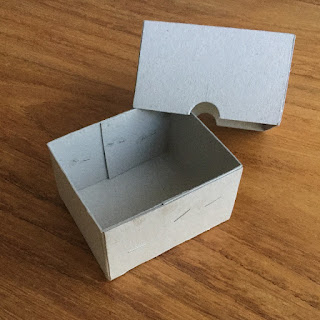 Following the images online and checking comparable boxes for clockwork motors, a new paperboard box was cut, folded, glued and stapled together. For sizing, the controller itself was taken as the guide. Starting with the lower box to be a fit for the part, then making a lid to fit the outside dimensions of the box. The overlap of the 'flaps' is as per the original, as are staples. To protect against scratching, the staples were covered with a dab of PVA glue on the inside of the box.

The original boxes were from straw-board (yellowish), that is not so easy to get today. So used dense paperboard (grey). No matter - this is very sturdy and it'll hold the item. 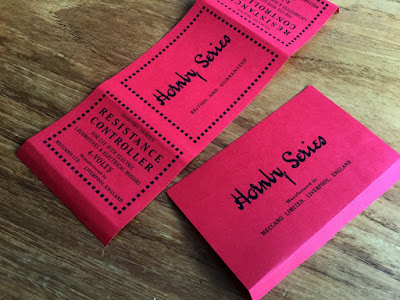 This Resistance Controller was sold in the 'Hornby Series' range of train accessories, so a bright red box. Using good quality photographs from some online-listings as guide, the artwork for the box was reproduced and printed on red paper. 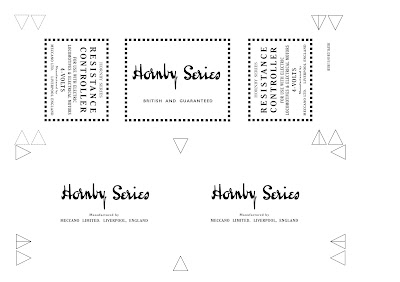 The layout of the covering was determined from the photographs, and from the limitations of printing no bigger than a sheet of A4. 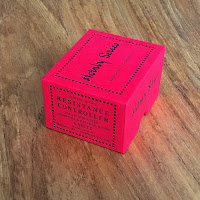 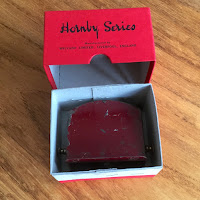 Applying the labels on the box -  a decent looking and very sturdy reproduction box to keep the part safe when it is not in use. 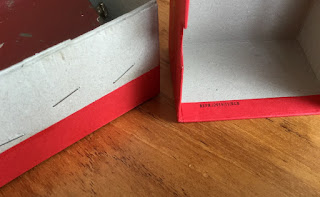 On the inner flap of the lid, a 'printers mark' added to make clear it is a modern reproduction. Should there ever be cause for confusion; for now the contrast is obvious - an old and battered part in a pristine box. 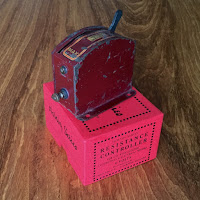