An object from another era

When looking at this little item, just realized that it is very much an object, an 'artifact', from another era. 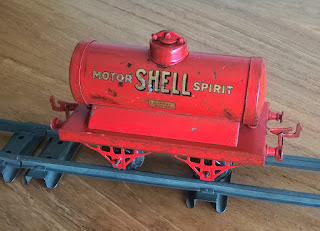 This little tank wagon was bought last month to go with the toy train-set we occasionally lay out on the living room floor. All the track and trains are of course 'old', dating from the mid 1920-ies up to the early fifties. It also all looks 'period' of course, with the clockwork little steam engine (that is surprisingly solid and heavy), all-metal wagons and the tinplate rails - depicting standard British railway practice of the early 20th century.

Nevertheless it all still works fine and is great to be played with by a kid today (and parent too).

This wagon was played with of course and has scuffs and scratches, but still looks much like it originally would have. A picture of the bright, new article is in the 1928 Hornby catalogue; a scan from the site of the Brighton Toy and Model Museum: 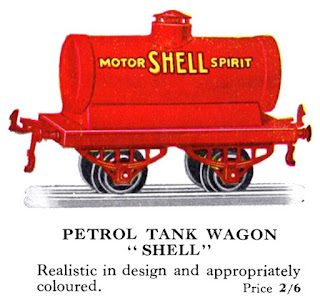 Our little toy railway wagon probably dates to 1928 or thereabouts. So do some of the other items he (we) play(s) with - but this little petrol tanker really struck me especially as 'from another time'.

Like our other wagons it is quite large and fairly crude as a model (it's a toy). Also it is all metal (unlike any modern toy train). The chassis with the spidery, open 'W-irons' (pre-1930 Hornby) adds to the quaint look, but also the fact that it is a petrol tanker from an oil-company. Somehow that makes it seem even more 'from another age'.

A nice addition to the 'set', and an unexpected marker of change.