The 'reference' Underwood 5 cleaned up quite well too. It types still, although the 'a'-levers are a bit wonky and the line-lock needs fixing. (A replacement for the missing set-screw for the line-lock was found in the special typewriter-bits tin - adjustment is an adventure that will be tackled later.)

It is a 1928 machine, but looks a bit anachronistic with its more modern ruler and the large, plastic platen knobs. The carriage-rack is also a later replacement. It means it has a nice corrosion-free lever, but the rack just fouls the backspace-mechanism when pressed down (carriage release). When moving the carriage with carriage-release pressed down it goes into a high-pitched squeak (should drive dogs wild). Despite all that, it types and is very much an Underwood 5 Standard Typewriter. Compared to the 1920 Underwood 5, there are a myriad little changes. From the ribbon-mechanism contrates now being spoked, to an entirely different frame casting. Partly because of different mechanisms for the ribbon and for the butterfly-scales, partly the differences seem stylistic only. The pillars at the corners of the frame no longer have clear 'capitals' and the bevels at the front of the frame are also slightly different. Even the carriage casting is different, the right return 'hook' has a different form from the 1920 machine. 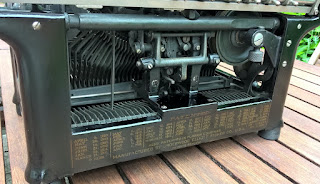 One obvious change (and an improvement I'd say) is the tensioning mechanism for the spring. This is an easy adjustment with a knurled knob that works via a worm-wheel to adjust the carriage spring. On the 1920 machine it is a winding handle with a separate escapement to control releasing the tension - plus a locking screw.

One justification for getting the 1928 machine was its cork platen. The rubber on the 1920 machine was rock-hard and liable to damage the type-slugs. As I'm not sure yet if I can get cylinders re-surfaced with rubber locally, a cork platen is a great alternative. It may not be as 'grippy' as a new rubber platen, but it will keep its resilience and should last near-indefinitely.

So removed the cork platen out of the 1928 machine. As bonus, it has a matching set of cork feed rollers. Four rear and four front feed rollers:

Then to remove the platen from the 1920 machine.

Surprise; it has three front feed rollers! The paper tray is in much nicer condition than the later '28 machine, but they are again different parts - not exchangeable. (Did Underwood just randomise these things?)
When lifting out the paper trays (they just lift out, not held), luckily the mounting brackets for both sets of rollers turned out to be still identical. So also the paper tray was exchanged together with the platen and feed rollers. The front feed roller rod just lifts out from its brackets. The rear rollers need to be wiggled out - pressing down on the holding bracket against its spring should provide enough clearance to slip it out from under the little protruding tab right next to it.

In case there is not enough clearance for this, the rear feed rollers bracket holding collar may need to be loosened. By undoing its set-screw, it may be nudged down a little bit more (green circle). After re-mounting everything the tension can be restored to what it was and the set-screw tightened again. (I should have taken more pictures!)

One more thing that was done, was putting felt pads on the paper tray. Now that the platen was out of the way and also the paper-tables removed for safety, this bit was accessible. Originally there would have been rubber tube slipped over the five tabs at the rear of the tray. Similar to the buffers under the spacebar, these would perhaps help 'dampen' any vibration of the paper table. Anyhow, they had long crumbled and gone. From self-adhesive felt for putting under furniture (3mm thick), pads of 11 by 6 mm were cut and placed in position on the tabs (yellow arrow).

With all parts exchanged, the shiny 1920 Underwood 5 typewriter now has a cork platen and rollers. This is much healthier for the type-slugs and the quality of printing also is clearly improved. 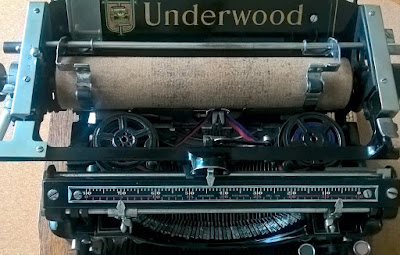 Apart from having had to swap paper-trays too, this is all as was the plan.

(However. Letting the '28 machine sit with the rock-hard platen now seems 'off' and a pity. To scout for a way to re-surface a rubber platen locally...)