The feet of the Underwood Champion portable still needed replacement. These Underwoods of the Typemaster range of the late 1930s have a slightly more complicated feet-arrangement than most machines, but replacements can be manufactured with 3D printing and basic materials.

The newly printed parts include rear-feet with a fold-up flap for buffering against the rear case-clamps (right-most). Then two rubber bushes for the front mounting-screws of the housing and left of them the front feet. The front feet are made of two parts, one rubber 'foot' and a hard-plastic flanged-bush to fixate them. Additional basic material is self-adhesive felt-pad (for furniture) and a tube of simple textile glue, i.e. latex. (The 3D models of the various printed parts are downloadable here in a zip-file archive.)

The rubber feet of themselves are somewhat dampening. To make 'cusioned feet' to further improve the noise-reduction, a layer of felt is added. The feet-base has a recess that takes a felt-pad cut to size. To give the felt grip, these are then given a thin layer of the textile glue. Of itself this does not adhere very well to the felt, but when 'tamped down' it will entangle in the felt and stay put. This gives the felt excellent grip when the weight of the typewriter is on them.

This Champion still had front feet, however these fell apart when trying to wrest them off the machine. The front feet of the Typemaster machines have a flange that was originally pushed through a hole in a tab of the machine frame. When the rubber was new and soft, that would have worked, today the rubber is fragile and the flange just comes off.
The new front feet are made of two parts; the hard-plastic bush is put through the tab from above, the rubber foot is then a press-fit on the bush. This hard-plastic bush is hollow, because this has to fit over a prong in the carrying case. Two tabs protruding from the inside-rim of the shell keep the feet from rotating.
The front screw for mounting the housing-shell looks like a regular foot-mounting bolt, but it isn't. It should hold a rubber block between the shell and the frame for extra sound-dampening. This rubber was long gone, now replaced with a rubber bush.
The rear feet are more conventional, these screw on as is expected for pre-war typewriters. First glue the flap into place, folded over in the slot in the top. The raised-lip should naturally be at the rear of the machine, otherwise it won't fit. These prints should have been about a mm longer towards the rear - the flap now is bent outward, but it'll have to do. 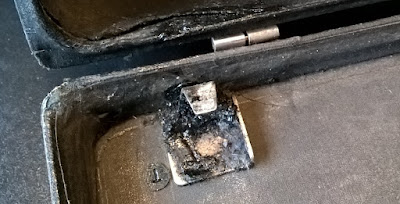 These remnants were chiseled away and with the newly manufactured feet the typewriter now again fits in the case. 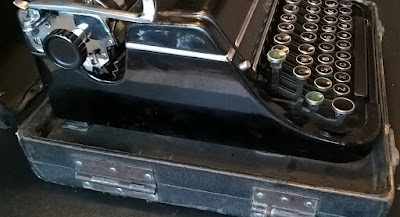 The rubber dampens, the felt gives additional cushioning. The embedded textile-glue gives enough grip for the typewriter to stay put when used. This typewriter is on its feet again :)

With these new feet, the refurbishing of this 1939 Underwood Champion is mostly finished. It is clean and usable, but to be fair it is 'worn out'. Apart from the scuffs and scratches of the outside, the inside mechanism is very worn and rather roughly 'patched-up' - so although it is again usable, it probably is not a good representation of what these Underwood Typemaster portables would/could/should be like as a writing machine. 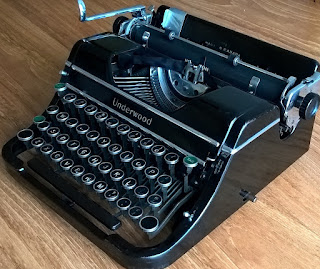 But this 1939 Champion still looks really stylish - swing era!
Posted by RobertG at 5:27 AM