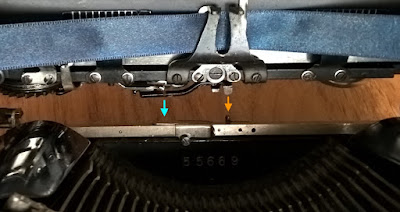 To make sure the bar will mesh correctly, a small felt-pad was placed behind the springs that bias it forward. These springs are mounted inside the machine back-plate. 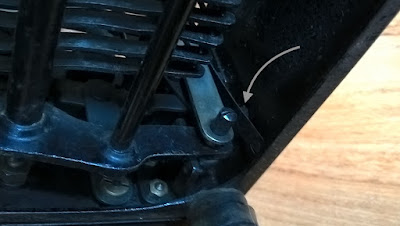 The felt-pad position can be tweaked to find the lowest added spring-force for reliable meshing. Because this spring is worked against with every keystroke, a lowest possible force is best.
Spacebar travel-limit buffers
A threaded rod on the spacebar holds buffers, moving against a forked tab on the frame. The upper buffer was still present, but it had been squished into the hollow of the metal spacebar. The century-old leather was given an infusion of leather-wax and two felt-pads for extra support.

The lower buffer probably perished decades ago and only two nuts remained on the threaded rod. A new buffer was made by a ring of felt glued to an M3 washer. The upper nut thus falls neatly inside the felt ring and makes the tab rest against the felt as the washer is clamped by the two nuts.
Re-nickeling rusted parts
This folding Erika must have lost its protective cover long ago - if it ever had one. The exposed bell had been damaged and rusted quite badly. Also the spring-drum screw was rather rusty. Even with this rust removed, the bare iron was jarring.

Basic kitchen-table nickel-plating works fine on brass, but not so well on plain steel. To prepare the parts for nickeling, they were first thoroughly cleaned with steel-wool and lightly sanded (random pattern) with fine sandpaper. This gives a smooth surface with lots of little scratches. To help with plating bare iron (or mild steel), the surface was then firmly rubbed with copper tape. Using thin tape allows the soft copper to be firmly rubbed onto the shaped surface and into any small scratches. The parts then have a vague reddish sheen, confirming that copper is indeed lodged in the surface.
The 'coppered' parts were then nickel-plated with the kitchen-table method. Where brass is done after about a minute, these were left in the electrolyte for over 10 minutes. Afterwards thoroughly washed and then polished-up.

The initial results look credible - especially the screw came out very well. The bell is clearly still pitted, but now again nickeled all-over. It will remain to be seen how long-lasting this fix will be of course, but for now this was a successful experiment :)
Wide ribbon
The typewriter had a regular 13 mm (half inch) ribbon when purchased. These Erika machines however need a 16 mm ribbon. (The narrow ribbon probably was the reason that vibrator-linkages had been bent out of shape a bit, would've been needed to make the too-narrow ribbon work on the machine.)
Whilst new 16 mm inked ribbon can be found, making one from scratch was tried with a length of 15 mm 'satin' ribbon from a local haberdashery store and stamp-pad ink. (According to the MSDS this ink is basically glycerol with colorants.) 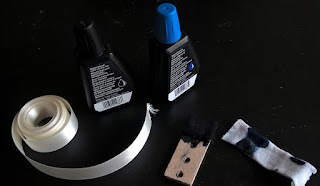 Inked by pulling/rubbing the ribbon over an inked pad, building up slowly with test-typing between applications (easier to add ink than to take it away again).

The net-result is not-great, compared to the reference black typing. The ink itself is probably too diluted and not ideal, but also the ribbon is likely too stiff. Nevertheless the machine does type with a wide ribbon and it's legible - functional and ready for use. 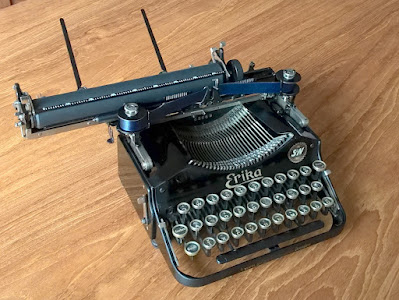 New nut!
As a last little fix, that missing nut of the backspace-crank was replaced with a shiny new hex-nut. This time the carriage mechanism still works even! It now only jams-up the backspace key - very occasionally... :) 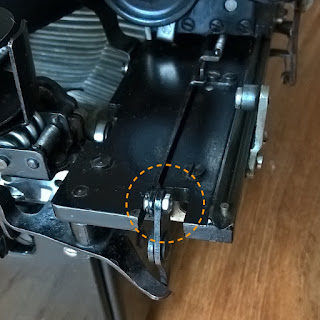 The backspace draw-bar may need some more tweaking, but for now pressing the backspace-key with care will do.
Facit
The little Erika folding typewriter is a great tinkering-object, an enjoyable "3D puzzle" to solve. To be honest however, as a typewriter it has not yet impressed. The build-quality is excellent, but the typing feel is cumbersome and the machine feels slow. Almost an opposite to the later Erika M's velvet touch and astonishing print-quality. 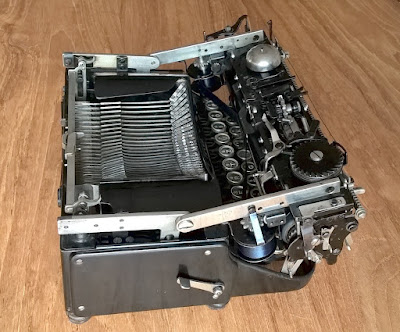