They did get a lot of mileage out of the giant typewriter, or perhaps secretly they did build several over time. This time it is shown in a 1937 clipping from Popular Mechanics. By then the huge typewriter surely was not news anymore and not yet World's Fair news? 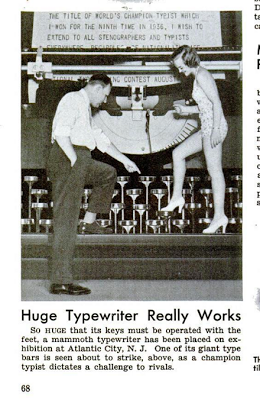 Now the champion typist is not racing hop-scotch over the keys, but leisurely dictating to the girl stepping around the keyboard. Though the picture shows the typist in profile; the clipping being from 1937 a champion of around that era would be likely. My first guess is that this could then be Norman Saksvig who won in Chicago then. 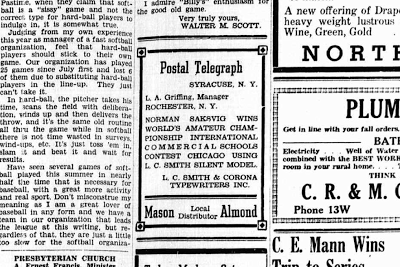 As proudly announced by Messr Smith-Corona's local distributor in a small add in a September 11, 1936 newspaper

That would be odd then. The giant typewriter was an Underwood marketing asset. Saksvig won on an LC Smith & Corona (and did publicity for them, at least did so around '47).

Maybe LC Smith & Corona also wanted a giant machine of their own.

Ah well, maybe it is not Saksvig. More likely then that it is George Hossfeld who was linked to Underwood and featured in their marketing materials.

Just a distraction...
Posted by RobertG at 3:53 AM