Getting the carriage back together of the red RP2 typewriter showed up the limits of the pictures I took during disassembly. Just not enough detail. The mounting of the raising mechanism likewise could have done with some better photographs.

For the Remington Portable (#2) there is as far as I could find out no service manual available. Coupled with the fact that these really are charming little machines, I went for the totally decadent option of getting another machine as reference material. (Imagine doing that back in the twenties when these cost $60.) 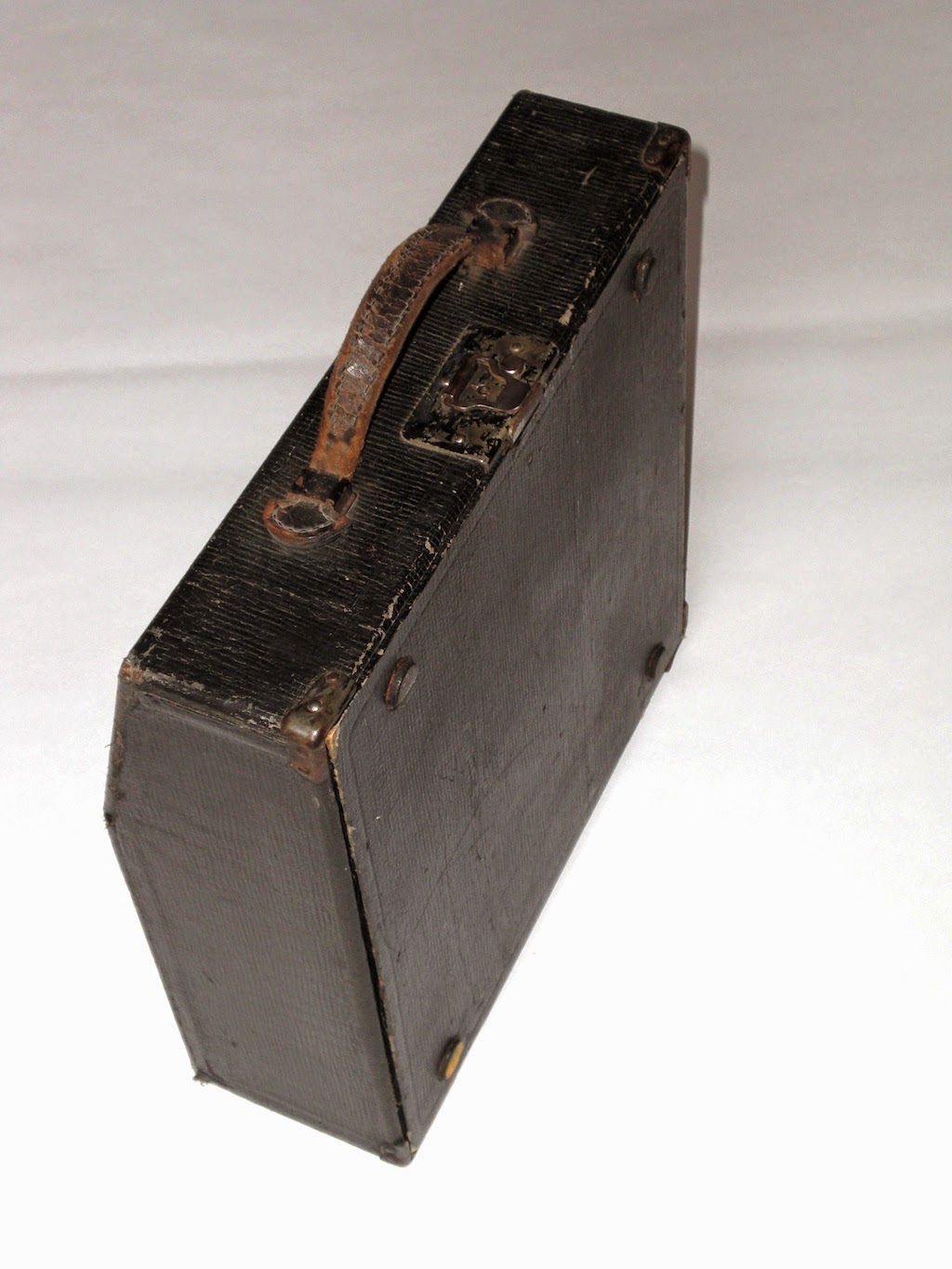 I've read mixed stories about Ebay for typewriter buying, but took a chance on the British version of the site and bid for this machine that looked interesting and had very reasonable shipping cost from Britain to the continent. With an interesting bidding experience, won it and got it shipped very promptly with decent packaging. 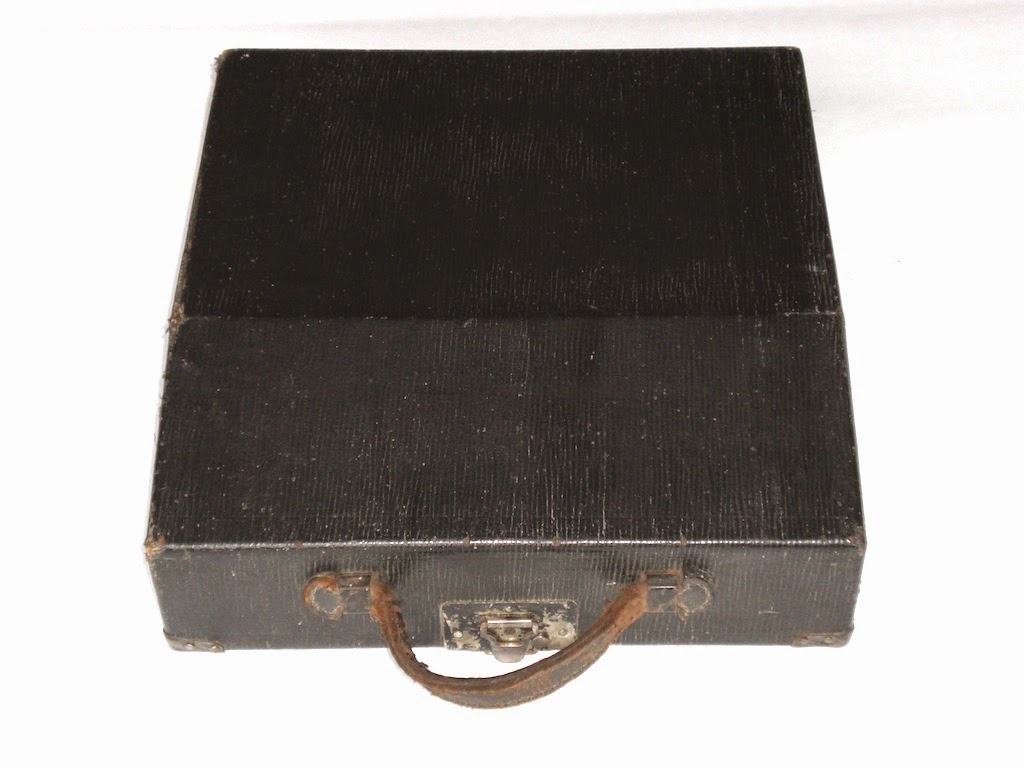 Looks its age of course, but importantly it is complete. Now also have the sizes and pattern for all the grommets and the leather carrying handle. 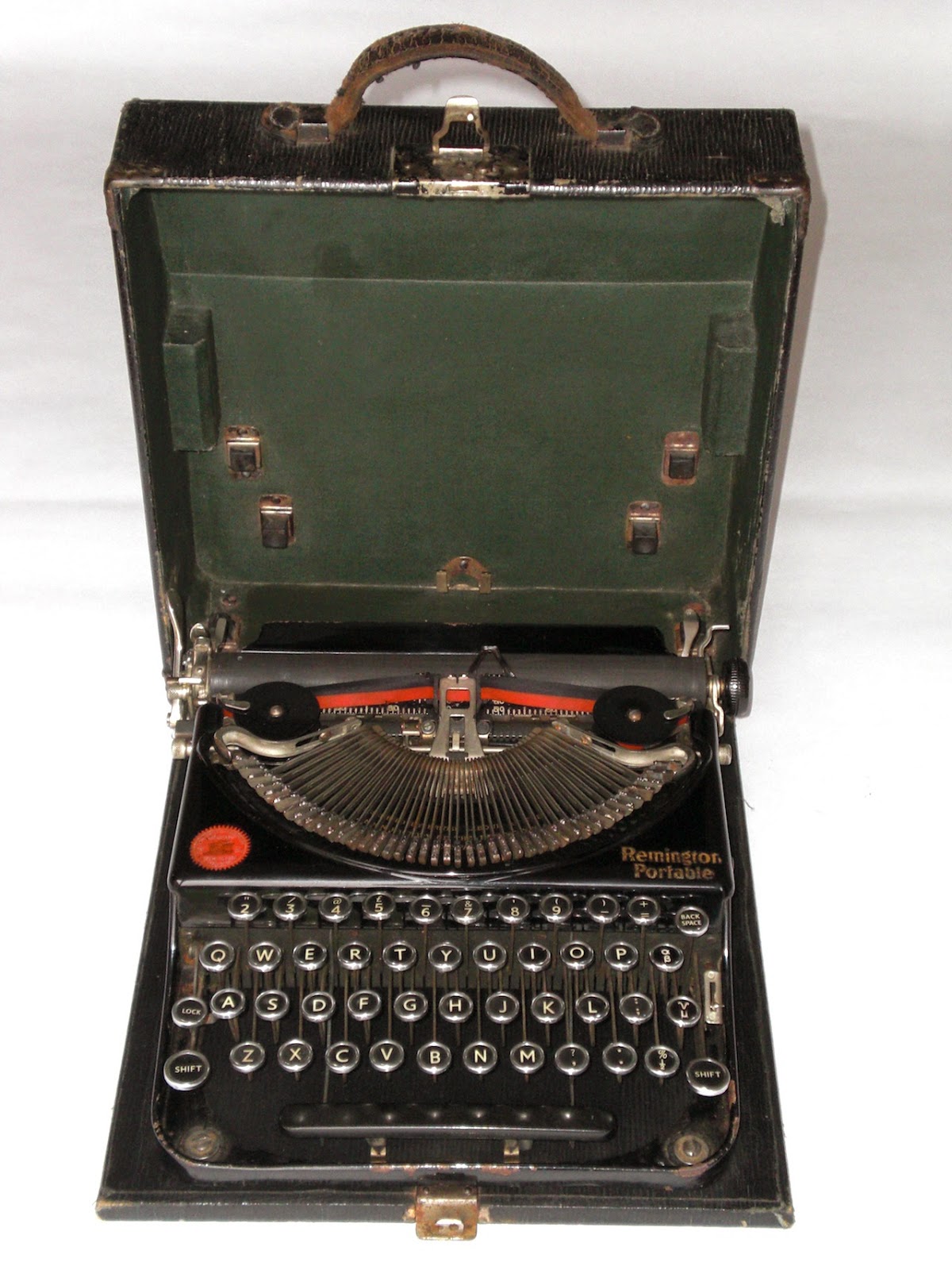 The machine inside with some rust in spots, but otherwise decent. Nice green lining inside, no warranty label in lid. The decals are in the old, #1 style on the top of the machine. No decal on the paper-tray. The machine in the pictures is already cleaned with nickel polished a bit. The spools were badly rusted, so these have already been re-painted. Other than that, it is as received. 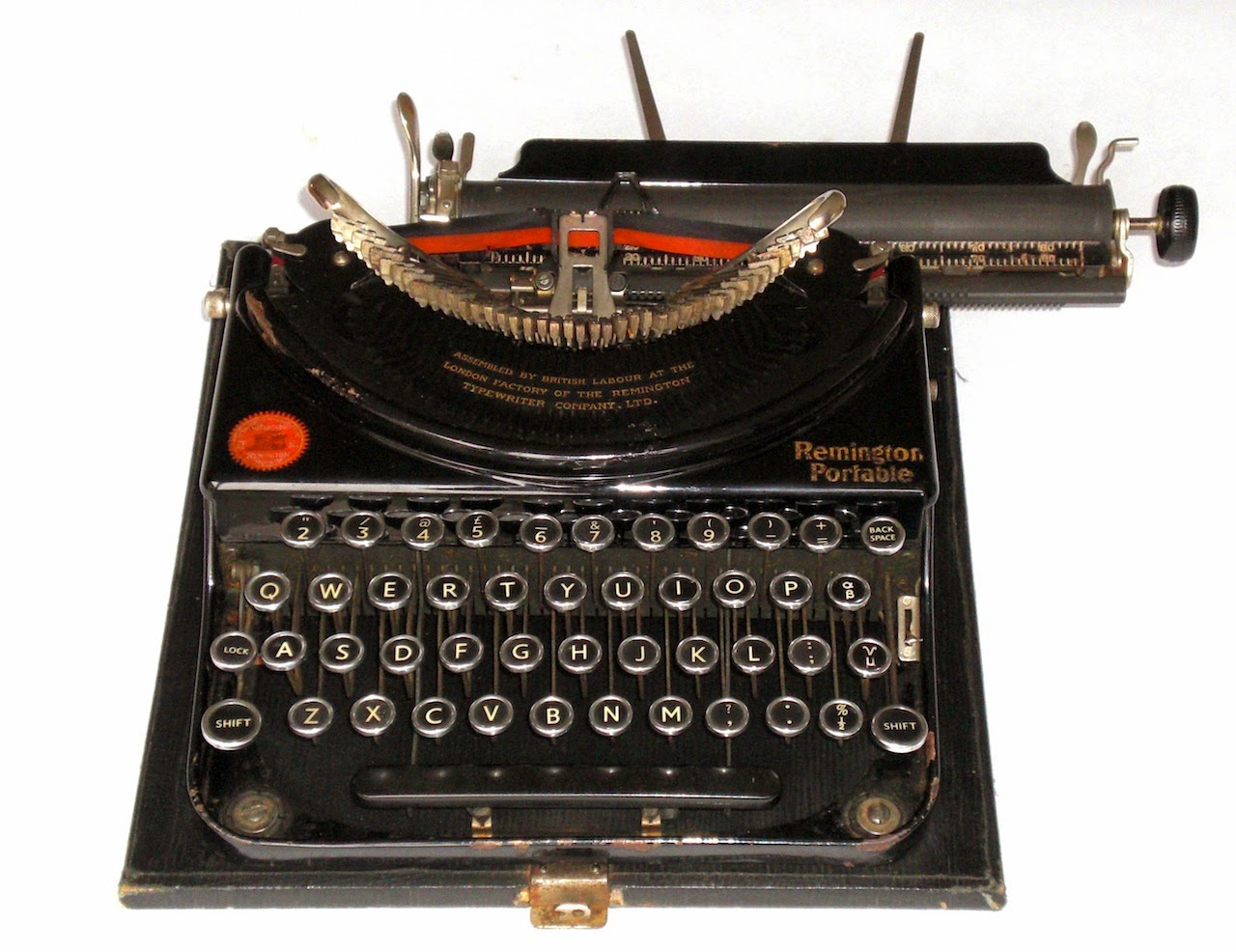 The Remington Portable above, ready for putting paper in and typing. The rubber of the carriage is in good condition. The platen is hard as expected (looks like slate), but all rollers are fine. Some sticky keys, yet everything seems to work and most importantly; the machine is complete (and assembled :) 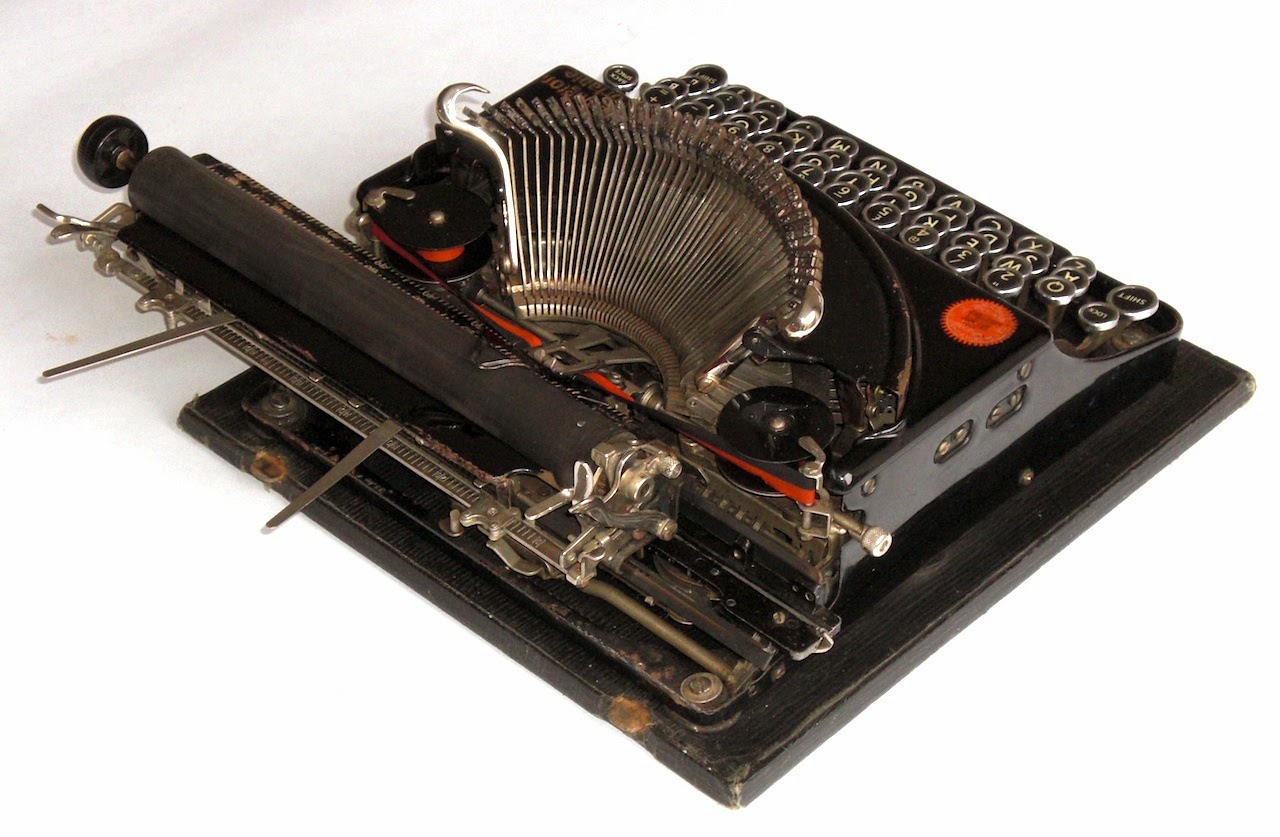 The machine was (first) assembled in November 1927 - serial number NZ700077. Or perhaps it is 70007-7. The last digit seems to be added in a slightly different typeface and alignment to the main. Still wondering what the 6-digit serial numbers are for these machines, most machines have a 5 digit serial. Was the main number added in the factory by a numerator (would make sense) and the last digit manually for some machines? Was the last digit added only in the British assembly plant? The world of Remington serial numbering :)

The machine's keyboard is a bit wobbly, all the keytops are slightly out of alignment. The keyboard is one of the things that made me notice the listing; it has the + and = signs and even some Greek characters. These keys are clearly a later modification to the machine, the British fraction keys having been replaced together with all keytops. The typeface of the keytops looks too modern for the twenties, more mid to late thirties. Also the keytop-rings are I think of a different type than those of the standard Portable keyboard. The Greek character keys have engraved disk as keytops instead of the paper disks as on the other keys. Suspect the standard sheets of cut-out keytops did not have the Greek. 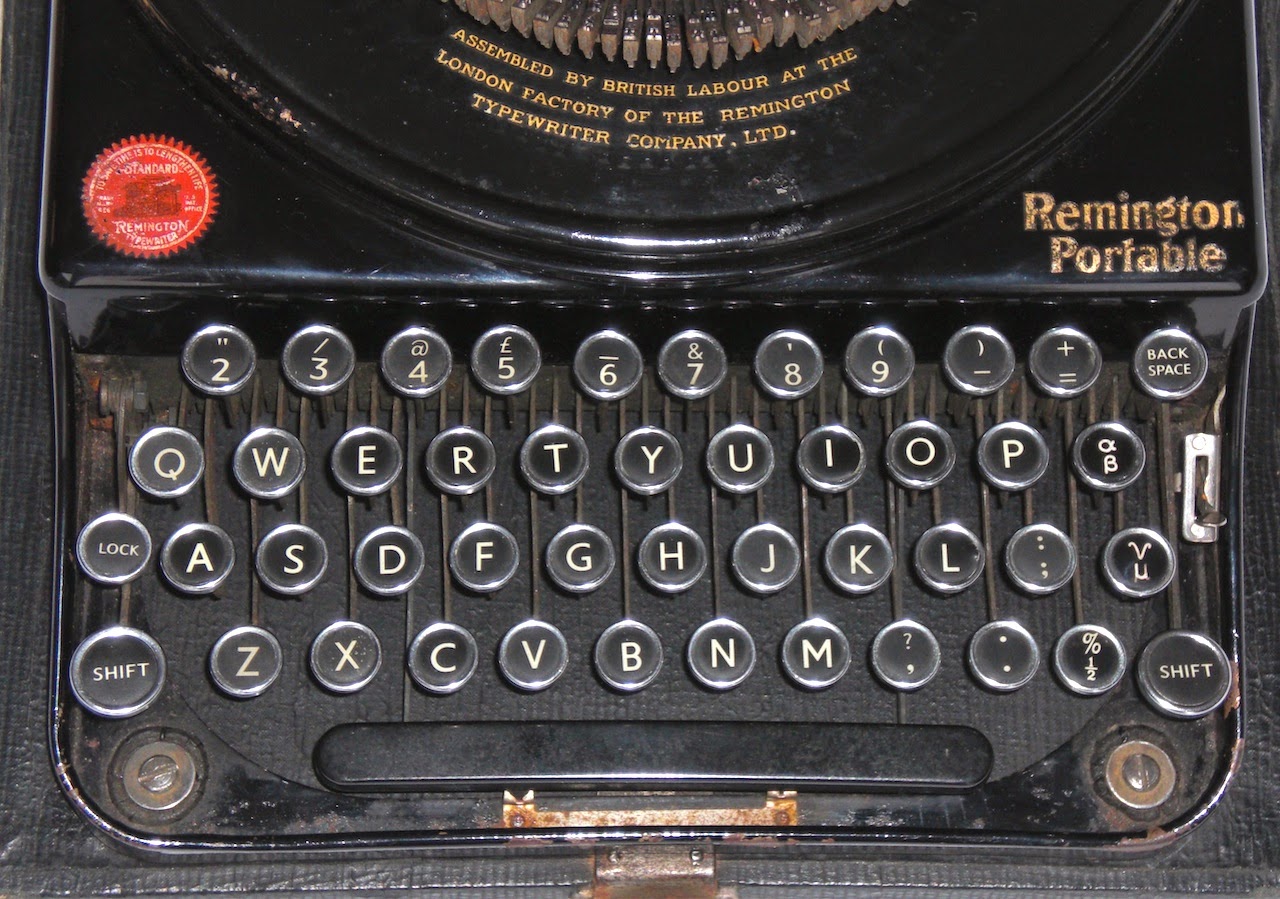 Now am wondering what profession would need a keyboard with alpha, beta, gamma and mu...

(Update: probably statistics.)
Posted by RobertG at 9:08 AM