Carriage of the Synela - continuing the S.I.M. typewriter repair

The next step in reviving this machine was tackling the carriage. Having taken it off the machine, it was stripped down to its bare frame with only the feed-rollers left in place. 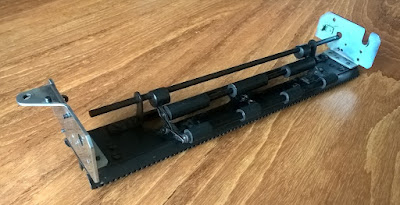 Noticed when taking it apart; the S.I.M. machine could also have been supplied with a line-release. This one does not have that, but the the rod and knob (left) are hollow so the carriage can take a platen with the extra parts for the form-fill / line-release function. 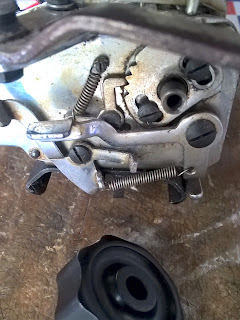 Another quirk during disassembly is that the platen-rod bearing on the right has an up-down adjustable bearing. The extra 'stop' allows taking off the platen and keep the alignment. In this case, everything was taken off for cleaning and polishing. 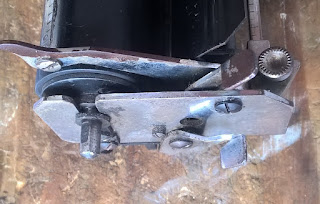 Overall, the machine started to feel very much like Royal portable typewriter. E.g. the return-lever and how it actuates the line-feed is the same, as is the basic frame construction of the whole machine. Comparing the two makes, it's probably fair to say that the S.I.M. typewriter is a 'knock-off' Royal. Their design copied from a 'P' in the early 1930s. 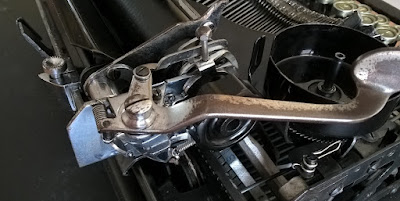 One thing they also copied was a very tricky carriage bearing construction. Taking the carriage off is a simple matter of removing the stop at an end of the rail. Then it slides out cleanly and four ball bearings drop out. Plus one little cage for every ball.

Putting it all back is unfortunately not straightforward. At least, it took several tries to get the cage+ball in - and get it in the right spot so that the carriage would do its full travel. Oh, and not lose a left-ball when you try to get in a right-ball. All very fiddly and confusing. It's all back on now, but I do wish I'd seen that straw-trick in this helpful video earlier (thank you!).
In any case, taking it off helped with cleaning - it did need cleaning...

With the carriage finally back on its rails (and clean), also the body-panels were placed back onto the machine. More fixes and missing parts to be tackled, but it is starting to look like a typewriter again :) 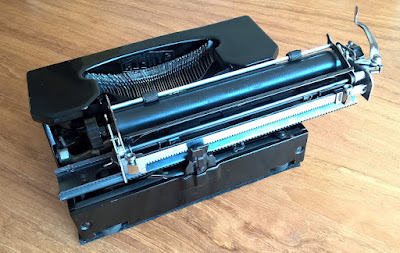 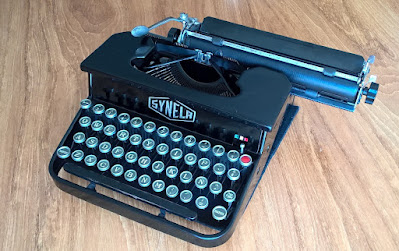