Typewriter safari - a manual (was that a Royal?), an electric and an electronic

Spotted on a thrift-store safari this morning - a Roytype typewriter. It is in a display cabinet behind glass in their office, not for sale. One of the items kept in their own collection :) 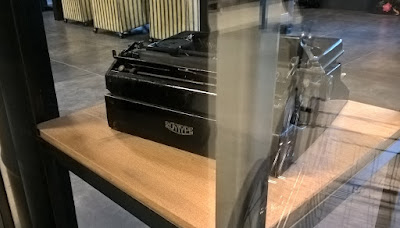 The Roytype branding was used by Royal for their ribbons, but not for typewriters. The machine was difficult to see, but seemed to be a bit different from the common models of 1930/40s Royal portable. (Royal Roytype typewriters were indeed made, but much later.) What Royal portable machine then is this - with that carriage sloping and an extra panel. Surely it is not a knock-off? It has a qwerty-keyboard and overall fairly Royal-y 'squarish'. Thinking of Rooy and their later run-in with Royal about their name (with swirly R), but the Rooy portables of the 1940s are quite different in style - sharp edges. Hard to credit that this would be a knock-off. More likely a regular Royal portable, one that I failed to identify seeing it only from behind - and from behind glass :-)

In another store; an electric SCM Coronet in a quite hideous, large, plastic suitcase. 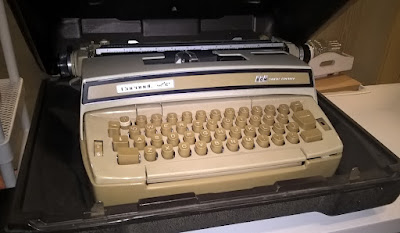 And in yet another store, on a dark bottom-shelf an electronic Philips typewriter from the end of the typewriter-era. 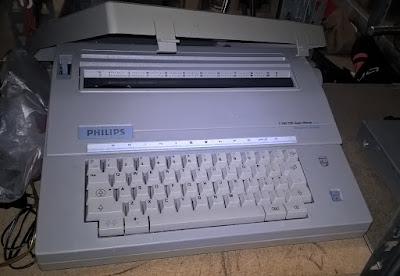 All machines left where they were, a photo-safari only :-)